(Please note: this special talk is for the WWI Armistice Centenary and will be held on a Friday) In 2015, the State Government established a unit within Veterans SA to coordinate commemoration of the Anzac Centenary for South Australia. One of the activities that found its way onto the to do list was production of a book about South Australia’s involvement in the Great War. Sourcing budget, a publisher, an author, and determining the books structure and contents were all part of the ambitious task. Sharon Cleary and Robert Kearney, with support from their respective in house teams at Veterans SA and the Virtual War Memorial, divided the subject material into home front and battlefront, with Robert writing the military history and Sharon compiling the history at home with support from the History Trust, and local historians and authors. Come and hear Sharon and Robert, with an introduction by Rob Manton, Director of Veterans SA, speak about how this special centenary project was conceived and achieved, and what the book reveals about South Australia’s involvement in the Great War – the people, the sacrifices they made at home and at war, and the short and long term impact it had on us all. 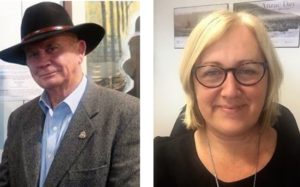 Robert Kearney is a military historian with insight that comes from 20 years of service in the Australian Regular Army and a further 18 years in the Army Reserve, mostly as a commissioned officer. Valour and Violets is Robert’s sixth book about Australia’s military history. In 2016, Robert was awarded an OAM for his service to military history preservation and the community.

Sharon Cleary is a content creator with producing, directing, writing and editing credits spanning her 30-year career in the media arts. She developed a passion for Australia’s military history when as a teenager she read A.B. Facey’s A Fortunate Life. As Manager of the Anzac Centenary Coordination Unit for Veterans SA (2015-2018) Sharon was seconded to Valour & Violets, working hand in hand with Robert and Wakefield Press to produce the book.