Join Holden historian Don Loffler and National Motor Museum senior curator Mick Bolognese as they discuss some of the most important landmarks in Holden’s manufacturing story.

Joining you from the National Motor Museum’s Holden Heroes exhibition, which features the company’s most prized heritage vehicle collection, Mick and Don will discuss the impact that these vehicles had on Australia after the Second World War. In its golden age, Holden sold about one in every two new cars in Australia, so it’s no wonder that most Australians have some connection with Holden cars, and that the retirement of the brand just a few months ago was so deeply felt. Discover (or remember!) some of Holden’s best known vehicles and rarely seen prototypes, and share your own Holden story at the end if you’re game!

This free public lecture is part of the History Trust’s Talking History series.

Lecture will commence at 5.30pm (ACDT) on Zoom. There will be a short Q&A following the lecture. 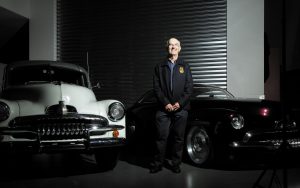 Don Loffler, the author of a number of hugely successful books on Holden cars, is widely regarded as one of Australia’s foremost authorities on early Holdens.

Since his retirement as Latin and German Master at St Peter’s College, Adelaide, Don has devoted his time to discovering and recovering the history of the Holden motor car in Australia. His quest has led him to uncover countless primary sources and an unparalleled visual record of the nation’s love affair with Holden.

Such was the public’s response to this book and the pouring forth of further illustrate information that Don was compelled to write a sequel, Still Holden Together, followed by an expanded version of She’s a Beauty in order to further illiterate the history of the first Holden vehicles. Subsequently Don has published another five books; he is now completing yet another expanded version of She’s a Beauty, this time in two volumes! 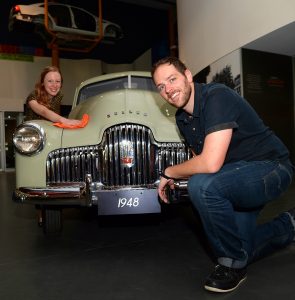 Mick Bolognese is the senior curator of the National Motor Museum, a role he has held for around 5 years. He leads a team that works to preserve, research and present the world’s most important collection of Australian motoring heritage. He has curated a number of exhibitions on the subject of Holden’s long history in Australia – a position he would not have expected to find himself in at sixteen, when he turned down the offer of a free old Holden Kingswood as his first car because it was ‘not cool enough’.